A friend of the family saw my restoration of our kids done with Photoshop, (it's an earlier posting on this site somewhere), and asked if I could lighten a picture of their grandmother? All they had was a copy of an old newspaper clipping. It was pretty streaky with a herringbone caused by the Benday dot patterns newspapers use to get halftones. There was something that looked like a feather in her hair but it maybe part of that herringbone effect so I downplayed it and left it out. The whole thing should have been repainted but I didn't have the time and the end result is a little ghostly. It's not my best work and I haven't heard back from them yet but it was free so they can't complain too much. 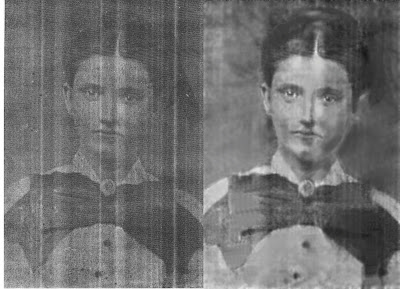 Click on image to enlarge
Posted by Joel Brinkerhoff at 8:39 AM