UPA created Mr. Magoo and Hanna Barbera made The Flintstones with an adult audience in mind. The Flintstones was the first prime-time animated series and was sponsored by Winston cigarettes.

These delightful commercials would never fly in today's PC world but they show how fun advertising was when the corporate executives, (before the agency 'creatives' took over), trusted the studios to make something for them without interference.


Posted by Joel Brinkerhoff at 9:33 AM No comments: 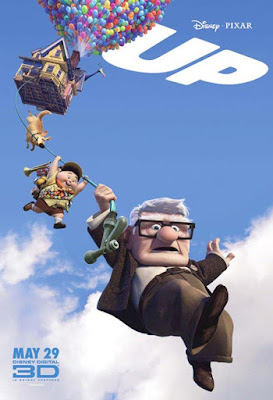 I’m banking on “Up” giving us an emotional connection with these characters that will linger with us long after we leave the theater.
Posted by Joel Brinkerhoff at 5:07 PM 2 comments:

I had the pleasure of teaming up again with my friend and fellow animator Melik Malkasian to animate these crazy squirrels.

Melik is a fine actor and has appeared in several TV shows, stage productions, and feature films so it's always a great experience working with him.

This is the second time we've teamed up to animate these squirrels. They've been modified but we first animated them in the direct to DVD movie "Dog Gone".

We tried to divide the shots up equally by length but somehow Melik got to do the great dancing scene. I fortunately did get to do the scenes where Leroy squirrel gets hit on the head and drops all his nuts. We tag teamed on the high-five and the running around the tree shot,(only shown on the website version).

This video is without sound but you might catch a better quality version of it on TV or better yet go to this website, watch the video with sound, roll over the squirrels to make them talk, look for Bigfoot and play some games while you're there.

Paste address above or click on title to go to site.

Flipping out in Toon Boom

Because I work primarily in 3D animation the time for exploring digitally drawn traditional animation has been on and off. I am getting familiarizes with the Toon Boom interface and tools but one big obstacle I'm hoping someone has overcome is how to 'flip' or 'roll' the drawings as one would using paper.

I thought being freed from the mountainous stack of loose drawings would be a big advantage. And it is to some extent but there are times when I want just a few drawings and to be able to put them in any order I want.

Many is the time I will reverse the order of the Key drawings when I'm doing the inbetweens, rolling the drawings back and forth to see the action. I can't do that digitally. Now you can use what is called 'onion skinning' to look through your stack of drawings and you can scroll back and forth in a time-line to see the progression of the action but it's not as discrete as having those pages on pegs to roll between your fingers.

With paper I can find those tweaks a drawing needs as I'm rolling the pages back and forth and can make changes and additions on the fly. But digitally I need to be on the right image layer and have it active to access a drawing. I've drawn on the wrong image sometimes impulsively because I wanted to make that addition and forgot I had to break my concentration in order to pick the right drawing level.

There must be something I am unaware of because many big studios are using Toon Boom today and I'm sure these issues have been addressed by them.

My friend Eric told me the keys F and G toggle between drawings and that seems to work to an extent. I can do better just scrubbing through the time-line.
Posted by Joel Brinkerhoff at 9:27 AM 3 comments:

Here is the gorgeous film "Sita Sings the Blues" by Nina Paley in it's entirety.

DVD version(s) will be coming soon!


Please help support this film.
Posted by Joel Brinkerhoff at 10:35 AM No comments: