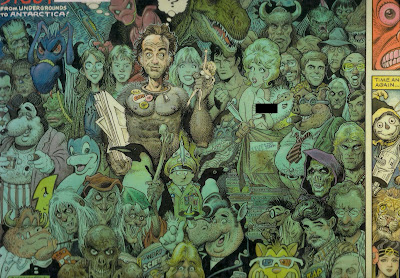 Okay I admit I live in a cave. I’m sure everybody has known about William Stout for years. But incase you are a cave-dweller like myself and don’t know this guy, you are in luck.

William Stout is a chameleon artist who has mastered a plethora of styles and works in a multitude of markets. He has done comics, movie posters, film art direction, storyboards and book illustrations. His styles encapsulate the best of artists like Arthur Rackham, Charles R. Knight, N.C. Wyeth and more contemporaries such as Wally Wood, Jack Kirby, Robert Crumb, and Frank Frazetta.

The guy is just incredible. Take a look at this portion of a cover for the “Comics Journal” he did. My scanner wouldn’t allow me to get the whole thing, (click on image to enlarge), but you can tell the guys is a monster. He has deservedly worked with pioneers like George Lukas, Steven Spielberg, Disney Studios, etc. etc. etc.
Posted by Joel Brinkerhoff at 11:00 AM No comments:

Many leading authorities on animation have written about the limitations of computer animation and the superiority of traditional drawn animation. If you are caught up in the media of a movie it tells me there is something wrong with the story.

I’ve seen movies with budgetary constraints that have transcended their limitations and have become classics because of their entertainment value and not the media they were executed in.

Story has proven to be everything. If traditional drawn animation were the criteria that determine the validity of good animation we wouldn’t have had the idiotic proclamation: drawn animation is dead and the long string of poorly received films which prompted the opinion.

The awful truth is animation in any form is hard to pull off. It is an art and art is subjective. You may not like Picasso or you might think he is a genius. Animation is a collective endeavor done by individual artists pooling their talents to form a work that will connect emotionally and aesthetically with a broad range of people with different life styles, political beliefs and religious convictions. Sound like a hard thing to accomplish?

The complaints of floaty, weightless, plastic characters that are disconnected with their environments are ludicrous when you examine the sliding feet on walk cycles and other glaring violations of physics seen in a majority of drawn animation from top leading studios. It tells me there is something deeper with the complaints than the fact it was computer animated.

I’ve seen traditional drawn animated films that were expertly drawn with beautiful attention to detail and design that have tanked. Not because they were drawn but because the story was bad. The characters were insincere and unbelievable. They reacted wrong in situations and people just couldn’t connect.

I’m not a snob for any media. I have done drawn, stop-motion, and computer animation and believe the strength and magic of animation is not about what style or technique you employ. It is story and characters that prove the success of animation. It is an art form and art is subjective.
Posted by Joel Brinkerhoff at 8:03 PM 1 comment:

The link above,(or clicking on the title), will take you to Smashing Telly and their posting of Richard Williams "The Thief and the Cobbler" recobbled. This is a recreation of the way Williams originally intended the film with NO SONGS and no Johnathon Winters babbling through the entire film. This recreation has some astounding perspective animation in it which is all the more impressive considering it was done in 1967 before computers were a viable alternative.

This special fan edit of The Thief and the Cobbler reconstructed by Garrett Gilchrist of Orange Cow Productions combines the fabled uncut work print with other footage from the released versions, as well as other rare materials to create the most complete film - not to mention the most faithful to the original vision.

UPDATE: The above video by Smashing Telly has been removed.  A new one is here:

Posted by Joel Brinkerhoff at 5:01 PM No comments: