The digital removal of cigarettes from Disney archives indicates a rather recent editing of the studio history. I would like to know when the removal of racist humor, although common to the times, was applied to the original 1940 film “Fantasia”? In the Beethoven Pastoral segment, the character Sunflower was, (understandably), cut with simple edits way before digital images existed. Later, the zebra centaurettes who rolled the red carpet out for Bacchus were digitally removed making the carpet appear to magically unroll itself. When was this last edit done, and why? They don’t seem offensive to me, am I wrong?

UPDATE:  The youtube vids are sometimes taken down because of ownership, but I have added smaller files that hopefully wont' get removed.  If you have trouble with the youtubes, try the ones below them. 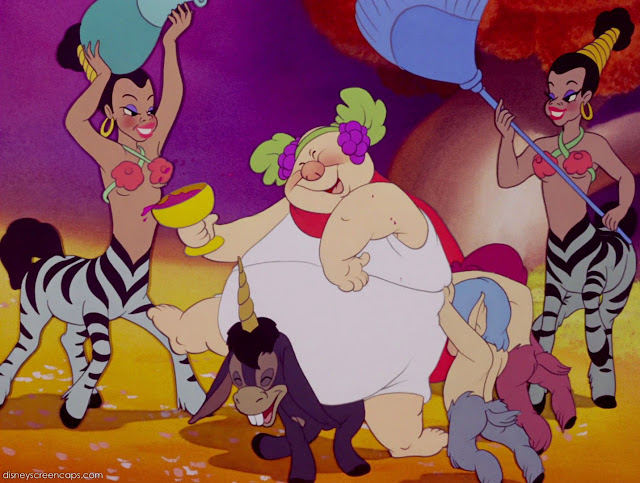 Not the best fidelity, but here’s the house jam mentioned in the last posting. All animators, the line up is Cory on bass, Ivo scratching, Fatty on guitar, Steve on drums, David on water cooler jugs, and myself on sax.

Posted by Joel Brinkerhoff at 9:21 AM No comments:

I found this on another Omation buddies site. Eric ‘Fatty Lees’ posted one of my dry board drawings that had started quite innocently as Fantasia-Minor and ended up Fantasia X-treme. The reeling drunks may have been mine but I swear the drug paraphernalia was added later.

Fatty’s site is still shaping up but you can see more dry board lunacy and even a movie clip of our house jam with Fatty on guitar and me on Saxophone, here: http://www.fattylees.com/ 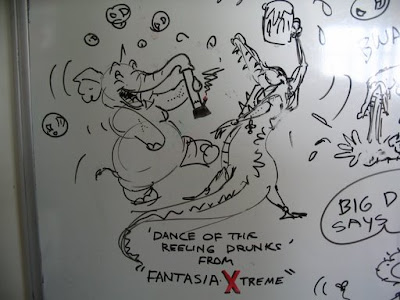 Posted by Joel Brinkerhoff at 7:50 AM No comments:

One of the many great pleasures of Omation was working with Kris Costa, one of the most amazing people I’ve ever met. Not only can he animate, the guy is a true artist. Words fail to do justice but fortunately images speak louder. Take a look at this virtual sculpture of Marty Feldman that he modeled and textured. 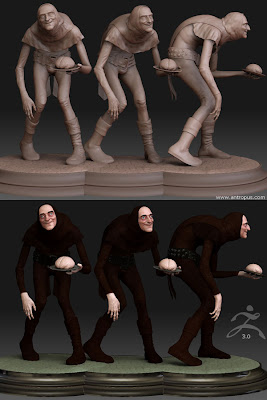 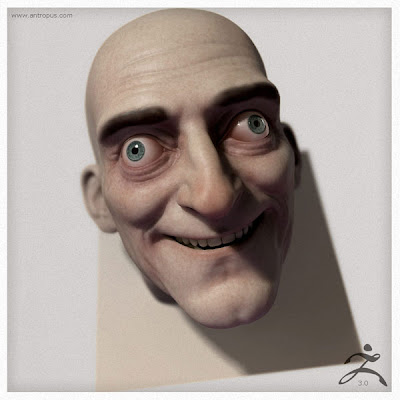 Posted by Joel Brinkerhoff at 11:25 AM No comments:

Animation Magazine has an interview with Laika’s Travis Knight. I’ve worked with Travis when Laika was Will Vinton Studios and I have to admit this article is the most I’ve ever heard Travis speak. He was a pretty quite guy and I understand why, (his dad was buying the studio). Regardless of all the politics, there is one thing that speaks louder than anything that went down in the transformation of the studio and that is Travis is a natural born animator. Stop-motion or computer, his characters move beautifully and their hands are particularly expressive. He did a sequence for Gary and Mike that I think is some of the best stop-motion anywhere. Travis would be an asset to any studio. I hope our paths cross again, and then maybe he could answer my question, why Laika and not Leica as in leica reel?

I wanted to do a test using live action as a reference and a character whose anatomy was different from humans. I used; I guess in this case it would be ‘Anthony the Tiger’,(They'rrrr fabulous!), because he was recognizable and I had a model sheet of him.

This test illustrates the difference between rotoscoping and reference. Snow White and most Disney features have live action film as reference but the styling and proportions of the characters make it impossible to call them rotoscoped. Rotoscoping is the verbatim tracing of live action footage as can be seen in the still images from Don Bluth’s “Thumbelina” posted below.

Other animated films with heavy rotoscope are Fleischer’s “Gulliver’s Travels”, and Ralph Bakshi’s “Lord of the Rings”.

Update:  For some reason many of my early Youtube videos don't play all the way through anymore.  Sorry for the inconvenience but it's out of my control. 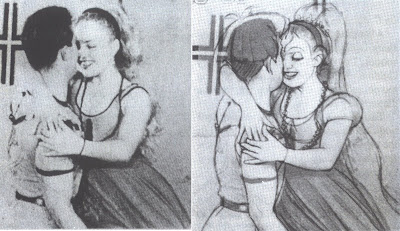 
UPDATE:  A sequence of reference for the Disney version of Alice in Wonderland was discovered and put beside the animation to show how much of the performance was altered by the animators.  Here it is:

Posted by Joel Brinkerhoff at 2:10 PM No comments:

We have long known animation is a great teaching tool. Here is a brilliant explanation of the copyright laws that even I can understand from Stanford Law School.

Posted by Joel Brinkerhoff at 9:10 AM No comments:

Speaking Of Ward Kimball, here is the scene he did that was cut from Snow White. It's nice but I can understand the reason it was taken out. It fell right on the heals of the 'Washing Song',(which was a better tune), and really didn't advance the story or character development. This and another Kimball sequence involving a bed built for Snow White were cut because they slowed the movie down. Walt felt badly about the cuts and gave Ward many opportunities to try and make up for it.
Posted by Joel Brinkerhoff at 10:34 AM No comments: 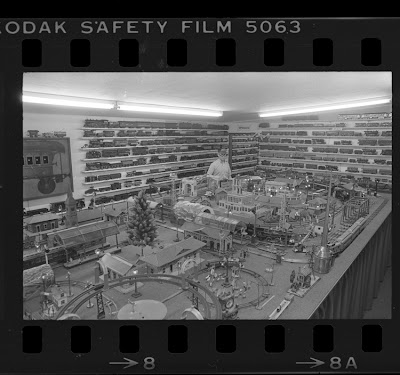 The lens on this picture makes the room appear much larger than it actually was, but here is Ward Kimball with his toy trains and airships. I had the privilege of a two week visit with the Kimball’s where I saw this and his other detached building of Disney Memorabilia first hand. The time spent with the Kimball’s made an indelible impression and I hope to enjoy life and work with as much integrity and fun as he seemed to.

Click on image to enlarge.
Posted by Joel Brinkerhoff at 8:33 AM No comments:

One of the most powerful attributes of animation is the ability to communicate mood and feeling visually. Strengthened with music it can transport you to realms beyond our daily norm or symbolically comment on the human condition in ways not possible in other media.

Yuri Norstein's Tale of Tales is a dreamy mix of memory and myth that reminds me of Chagall and Fellini. Fragmentary and illusive, touching and haunting this is a masterpiece of artistry that could only be animation.

Posted by Joel Brinkerhoff at 2:00 PM No comments:

Hedgehog In The Fog

I'm really digging all the great animation posted on YouTube. I wish the quality were better but it still allows you to see some obscure and classic films from around the world.

Here's one of my favorites: Yuri Norstein's Hedgehog in the Fog. There are versions without subtitles available that don't encroach on the picture but I thought the translation adds to the poetic understanding of the narration.

It looks to be shot on glass with flat cutouts, but his control of light and shadow and the multi plane depth he creates along with elements like water make me wonder just how he pulled it off.
Posted by Joel Brinkerhoff at 10:12 AM No comments: 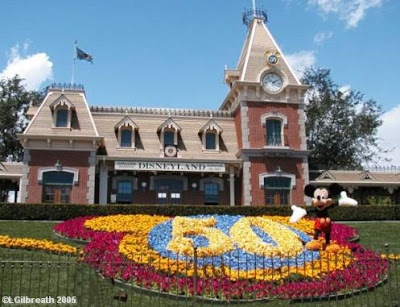 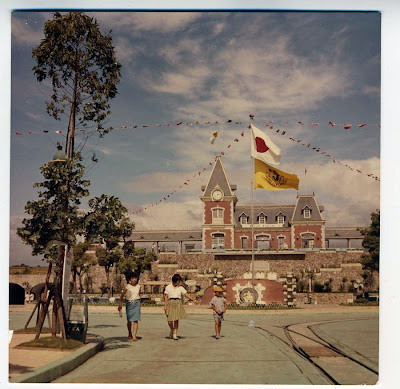 Cartoon Brew has an article on China's blatant plagiarizing of Disneyland. Apparently they were not alone. Check out this postcard from a Japanese amusement park called Nara and the building from Disneyland Main street USA.

Check out article on China here: http://www.cartoonbrew.com/disney/chinas-unlicensed-knock-off-of-disneyland
Posted by Joel Brinkerhoff at 11:55 AM No comments:

This may seem like over kill to some but I found these interesting. Someone called cookedart has posted these on YouTube. It’s a scene from The Emperors New Groove going from story reel, to rough animation, to clean-up.