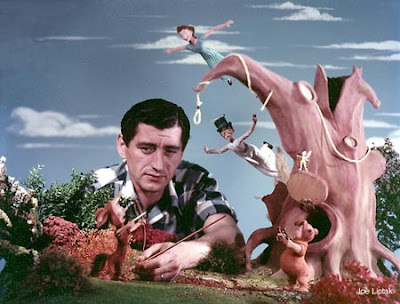 Here is a cool picture of Joe Liptak sculpting a scene for the Viewmaster reel of Peter Pan.

I've been playing with stereoscopic drawings and went hunting for information on how the Viewmaster Company made their very cool 'drawn' reels. We all know the company made sculptures and photographed them with a 3D camera,(Animated GIF of Tigger), but how did they do the drawn ones?

Some were your typical drawings cut up into planes like most anaglyph printing of artwork. The best had depth that bent back into space and appeared to have actual round edges,(Animated GIF of Space Mouse).

If you have any information on how they created theses astonishing images please contact me.
Posted by Joel Brinkerhoff at 8:50 AM 2 comments:

I love it when life becomes surreal.
Posted by Joel Brinkerhoff at 8:43 AM No comments: 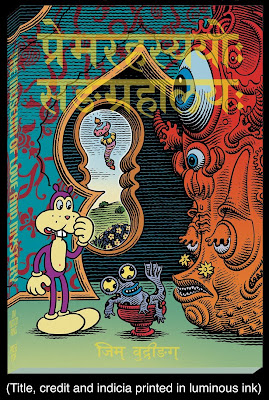 If you've never seen Jim Woodrings work, you have probably dreamed about it. Jim is a Seattle artist with a cryptic wit and an otherworldly ability to realise those intangibles that lurk in the soft grey folds. He has a cool blog here: http://jimwoodring.blogspot.com/
Posted by Joel Brinkerhoff at 7:48 AM No comments: 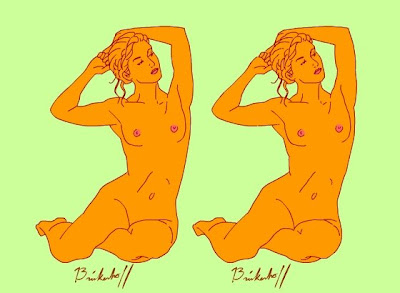 If someone hit you on the back of the head with your eyes crossed would they really stick that way? This is what my mother would tell me, but it's something you need to do to see this free-view style stereoscopic picture that I did.  Cross your eyes and focus on the image that forms in the middle.  I hope no one hits you in the back of the head while you're doing that.  Let me know what happens if someone does.

Click on image to enlarge.
Posted by Joel Brinkerhoff at 11:50 AM No comments:

Kevin MacLean has posted the 1978 film "Claymation" that first made me want to work at Will Vintons' Studio, (which I did for thirteen years!).

See Will with a full beard and long hair! The second part is on YouTube here: http://www.youtube.com/watch?v=Wbc5Nc4GQ5c&feature=related

Posted by Joel Brinkerhoff at 1:54 PM No comments: 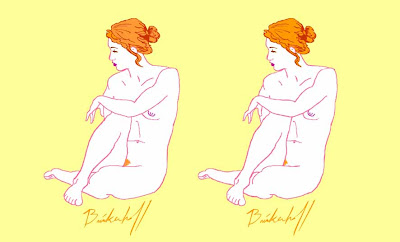 Yet another free-view life drawing of mine. Click on image to enlarge
Posted by Joel Brinkerhoff at 9:41 AM No comments: 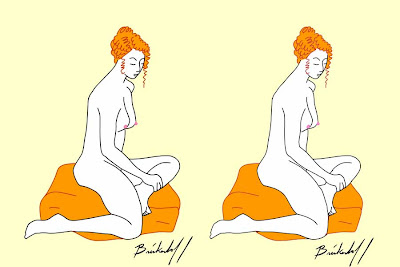 I thought I would try adding color to one of my stereoscopic images. Click on image to enlarge.
Posted by Joel Brinkerhoff at 8:07 PM No comments: 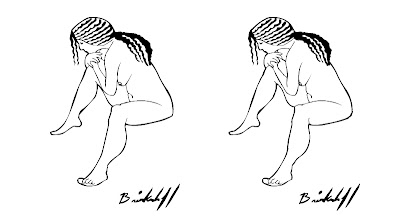 I’ve tried making anaglyphic stereoscopic pictures but the exporting of them has always skewed the colors making the blue and red lens glasses useless. A more ideal method is called free-viewing and is harder for some people to do but you don’t need glasses. It requires the viewer to cross their eyes and focus on the image that forms in the middle of the two images. For those who can do it, here is my life drawing that I’ve make into a stereo picture. Click on the image to view as a larger version.
Posted by Joel Brinkerhoff at 8:57 PM 2 comments: 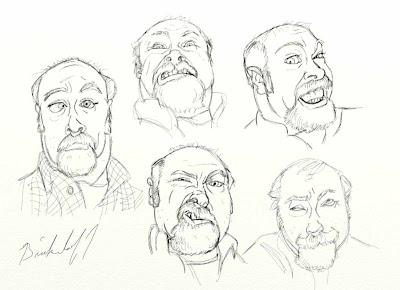 Maybe this should be called self-defacing. I wanted to do a bearded character with more expressive mouths than just some squiggly lines. “I’ve got a beard!” I said to myself, “You call that a beard?” I replied idiotically and with a full grasp of the obvious used myself as a model to do some mouth studies. Well these digital sketches are more realistic than the character mouths, (which ended up as squiggly lines), finally turned out, and really look nothing like me, (I’m much cuter and look more like an old demented Gerber baby). But I thought they might raise a smile if I posted them. Boy was I wrong.
Posted by Joel Brinkerhoff at 8:18 AM 2 comments:

Sally Cruikshank has put her delightful work on YouTube including my fave “Quasi at the Quackadero”. Find them here: http://www.youtube.com/user/laughingsal

Sally has a feature that's been baking in her brain for years. I hope one day we all get to enjoy it.
Posted by Joel Brinkerhoff at 8:15 AM No comments:

Lesson One: Herd Your Black Sheep

The Quarterly: How did your first project at Pixar—The Incredibles—shake things up?


Brad Bird: I said, “Give us the black sheep. I want artists who are frustrated. I want the ones who have another way of doing things that nobody’s listening to. Give us all the guys who are probably headed out the door.” A lot of them were malcontents because they saw different ways of doing things, but there was little opportunity to try them, since the established way was working very, very well. We gave the black sheep a chance to prove their theories, and we changed the way a number of things are done here.

Lesson Two: Perfect is the Enemy of Innovation

The Quarterly: What sorts of things did you do differently?


Brad Bird: I had to shake the purist out of them—essentially frighten them into realizing I was ready to use quick and dirty “cheats” to get something on screen… I’d say, “Look, I don’t have to do the water through a computer simulation program… I’m perfectly content to film a splash in a swimming pool and just composite the water in.” I never did film the pool splash [but] talking this way helped everyone understand that we didn’t have to make something that would work from every angle. Not all shots are created equal. Certain shots need to be perfect, others need to be very good, and there are some that only need to be good enough to not break the spell.


The Quarterly: Do angry people—malcontents, in your words—make for better innovation?

Brad Bird: Involved people make for better innovation… Involved people can be quiet, loud, or anything in-between—what they have in common is a restless, probing nature: “I want to get to the problem. There’s something I want to do.” If you had thermal glasses, you could see heat coming off them.

The Quarterly: How do you build and lead a team?

Brad Bird: I got everybody in a room. This was different from what the previous guy had done; he had reviewed the work in private, generated notes, and sent them to the person… I said, “Look, this is a young team. As individual animators, we all have different strengths and weaknesses, but if we can interconnect all our strengths, we are collectively the greatest animator on earth. So I want you guys to speak up and drop your drawers. We’re going to look at your scenes in front of everybody. Everyone will get humiliated and encouraged together…

The Quarterly: It sounds like you spend a fair amount of time thinking about the morale of your teams.

The Quarterly: Engagement, morale—what else is critical for stimulating innovative thinking?


Brad Bird: The first step in achieving the impossible is believing that the impossible can be achieved. … “You don’t play it safe—you do something that scares you, that’s at the edge of your capabilities, where you might fail. That’s what gets you up in the morning.”

The Quarterly: What does Pixar do to stimulate a creative culture?


Brad Bird: If you walk around downstairs in the animation area, you’ll see that it is unhinged. People are allowed to create whatever front to their office they want. One guy might build a front that’s like a Western town. Someone else might do something that looks like Hawaii…John [Lasseter] believes that if you have a loose, free kind of atmosphere, it helps creativity.

Then there’s our building. Steve Jobs basically designed this building. In the center, he created this big atrium area, which seems initially like a waste of space. The reason he did it was that everybody goes off and works in their individual areas. People who work on software code are here, people who animate are there, and people who do designs are over there. Steve put the mailboxes, the meetings rooms, the cafeteria, and, most insidiously and brilliantly, the bathrooms in the center—which initially drove us crazy—so that you run into everybody during the course of a day. [Jobs] realized that when people run into each other, when they make eye contact, things happen. So he made it impossible for you not to run into the rest of the company.

The Quarterly: Is there anything else you’d highlight that contributes to creativity around here?


Brad Bird: One thing Pixar does [is] “PU,” or Pixar University. If you work in lighting but you want to learn how to animate, there’s a class to show you animation. There are classes in story structure, in Photoshop, even in Krav Maga, the Israeli self-defense system. Pixar basically encourages people to learn outside of their areas, which makes them more complete. [and more creative].

The Quarterly: What undermines Innovation?


Brad Bird: Passive-aggressive people—people who don’t show their colors in the group but then get behind the scenes and peck away—are poisonous. I can usually spot those people fairly soon and I weed them out.

The Quarterly: How would you compare the Disney of your early career with Pixar today?


Brad Bird: When I entered Disney, it was like a classic Cadillac Phaeton that had been left out in the rain… The company’s thought process was not, “We have all this amazing machinery—how do we use it to make exciting things? We could go to Mars in this rocket ship!” It was, “We don’t understand Walt Disney at all. We don’t understand what he did. Let’s not screw it up. Let’s just preserve this rocket ship; going somewhere new in it might damage it.”

Walt Disney’s mantra was, “I don’t make movies to make money—I make money to make movies.” That’s a good way to sum up the difference between Disney at its height and Disney when it was lost. It’s also true of Pixar and a lot of other companies. It seems counterintuitive, but for imagination-based companies to succeed in the long run, making money can’t be the focus.
Posted by Joel Brinkerhoff at 8:51 AM No comments: 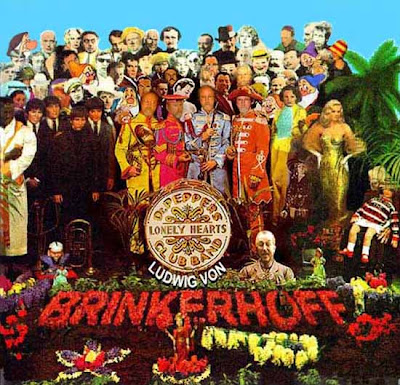 Awhile back I tired to teach myself how to use a sound software program so I could do my own soundtracks for animation. The program allows multi tracking and lots of filters to modify sounds. I couldn't resist taking some of my crappy original songs and goofing on them. I lost everything in a computer crash before I could do a final mix but the rough tracks were saved and compiled into two pages of MySpace here: http://www.myspace.com/ludwigvonbrinkerhoff and here: http://www.myspace.com/ludwigvonb
You may not think too much of them, (I don't), but it's just too easy to stick stuff on the web anymore.

Posted by Joel Brinkerhoff at 8:57 AM No comments:

I'm so glad students of animation and working animators are putting terrific posts online of what they have learned. This was taken from Victor Navone's Online Gallery blog http://www.navone.org/blogger/2007/09/3-speeds.html and I thought it a very good study for why we should look for opportunities to get variation in timing into our animation. 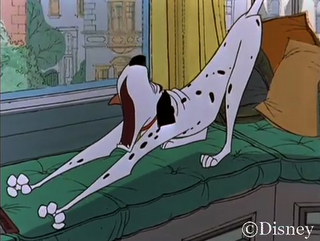 Posted by Joel Brinkerhoff at 7:11 AM No comments: