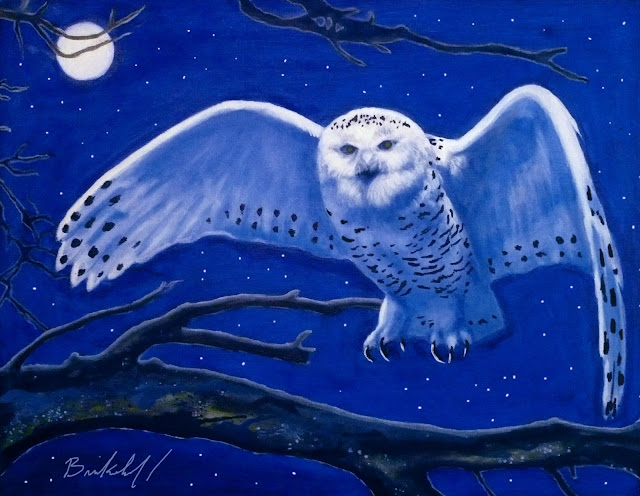 Here's an oil painting I just finished and mailed out to it's new owners. The lighting is cheated quite a bit but I call it poetic license, perhaps the bird is flying up to a hidden bounce card that's just off screen?  I did smooth out the background and made the stars more varied but I didn't photograph the finished picture.  Shame on me.
Posted by Joel Brinkerhoff at 9:40 AM No comments:

With Klaus, Sergio Pablos has created a potential game-changer by applying the latest digital technology to a traditional approach, and, in the process, redefining what a hand-drawn feature could look like. Pablos is keeping his proprietary process under wraps for the moment.

You could be forgiven for thinking the character animation was modeled and animated with CGI software because Klaus has the polished sheen of the latest big-budget studio CGI epic. But watch again, and the enduring organic charm of hand-drawn animation is evident throughout.

Pablos, of course, knows a thing or two about drawn animation. An accomplished animation master who participated in the 1990s Disney renaissance, he animated on films such as The Hunchback of Notre Dame and Hercules, before supervising Tantor in Tarzan and Dr. Doppler in Treasure Planet.
After the hand-drawn feature animation industry collapsed stateside, he moved back to his home country of Spain where he launched his own company Animagic (today, known as SPA Studios). His company has racked up an impressive list of credits, providing pre-production and production support to feature productions, but Pablos’s biggest claim to fame is originating the concept for the blockbuster Illumination franchise Despicable Me.

This is a rather truncated posting and the original with an interview of Pablos for Cartoon Brew is here in its entirety:  http://www.cartoonbrew.com/interviews/sergio-pablos-talks-about-his-stunning-hand-drawn-project-klaus-exclusive-113621.html