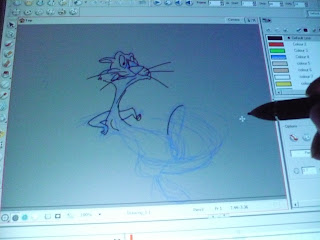 I've been looking for a way of doing paperless animation and have settled on a software.  Now, the difficulty has been drawing with a Wacom Tablet which is okay for a lot of things but not precises enough to do good in-betweens and clean-up.  Everyone uses the 21" Cintiq for this which allows you to draw directly on the screen.  They also make a 12" but the expense has been too much to justify.  After checking into tablet PCs I found the LE1600 by Motion Computing but the cost was still pretty high.  Now after a few years I found a used one on Amazon and  got it for almost nothing!  It has Wacom technology like the Cintiq and is also another computer as opposed to just being a drawing screen!  I've got just the project to run through it!
Posted by Joel Brinkerhoff at 9:54 AM

Cold Hard Flash posted a little while ago about a Cintiq alternative that's half the price.

There's comments from a small animation house who's been using them for their production.

Thanks, I just watched the video and will follow this brand for awhile to see what others say. It's good to know there are alternatives out there.

P.S. I'm pretty happy with my small table PC and find I like the portability. It's very rugged too,( they actually do drop tests), so I can take it outside to a zoo or park.