Back to Stop Motion

It's been awhile since I have posted anything about anything. Partly because I took a much needed vacation, and mostly because upon my returned I took an offer to do some stop motion again for a Holiday Special called "Jingle All the Way".
It's very cute and has a lot of heart and I hope it will become a perennial favorite like "Rudolph" but, oh my, I forgot how physical stop motion animation is, and I've been just too tired to do anything else afterward.

The first week had me climbing onto a table top to reach the characters for every frame, (I think it was a shot well over 100 frames too), and the first night I has a massive leg cramp that made me stifle crying out and waking my wife. I've lost five pounds so that's not bad, but I've also lost sleep worrying about how to get shots done.

I've had a chance to work with some new technology that wasn't around before called Dragon Stop Motion which is pretty cool and allows you to plot out your shots with more accuracy. I also have renewed admiration for all the talent involved in a stop-mo production. It takes a fairly sizable crew to light and build sets and keep the puppets in good repair.

It's also humbling to work with the other animators. They're all so talented and young. I asked one of the crew if they had worked on "The PJs" which was a stop motion TV series that ran three seasons. She laughed and said she hadn't been born yet! Man, I'm old.

I'm mostly looking forward to watching this with my grand-kids, (yes, I said grand-kids. I told you I was old.). I also want one of those Jingle Xmas ornaments for my tree! 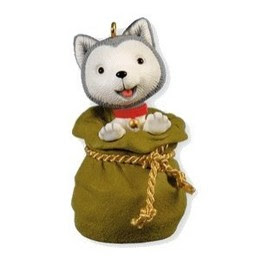 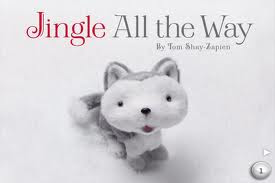 The Hallmark Book the Special is based on.


Read more about the production here:http://tv.broadwayworld.com/article/Jingle-All-The-Way-Premires-Exclusively-On-Hallmark-1125-20110727
Posted by Joel Brinkerhoff at 5:06 PM 2 comments: