I animated this sequence for the game The Dark Void sometime ago but just found it on YouTube. The character at the end overhearing their conversation is a different design than what was originally there.  The sequence is a little stiff to me now but still in keeping with the rest of the acting in the game for the most part.  It is choppier because this was captured from the game engine and the refresh rate isn't always fast enough.

I feel compelled to mention there is no motion capture in this game. It seems mo-cap is becoming more prevalent in cg animation but it wasn't used here.

Posted by Joel Brinkerhoff at 5:11 PM No comments: 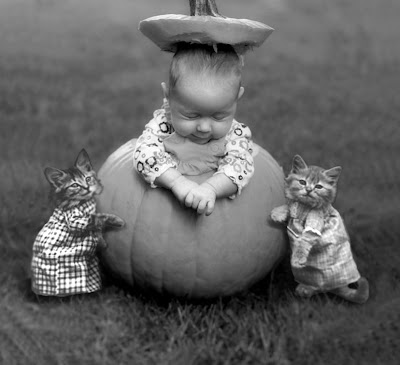 All Hail The Pumpkin Queen! This is a photo of my granddaughter taken by her Aunt Joanne Zarzana. I pushed it over the top by adding the kitties. This will probably be my next painting.
Posted by Joel Brinkerhoff at 3:46 PM 3 comments:

I'm just playing with the stills I shot of my painting "After the Hunt". They weren't registered and shot under different lighting conditions. I tried to tidy them up as best I could.

Posted by Joel Brinkerhoff at 10:18 AM No comments: