Stop Motion in the Digital Age #04

In earlier postings we touched on replacement animation used in stop-motions history, and facial animation  replacements as early as 1935.  We also tracked the replacement evolution with computer sculptures exported as 3D prints being used as early as 2004.

My friend Raphael Cordero ,(whose studio did the sculpture, molds, and castings), posted some images that helps define a timeline for the facial replacements evolution even better with these hand cast test pieces for the 2001 production of the Will Vinton TV series "Gary and Mike", a production that has greater relevance with the digital age, which I will explain later.  These were hand sculpted, using a frame grabber, (see previous post Claymation, Techniques and Innovations ), to ensure registration, and then cast in resin.  The faces were split through the eyes and held on the head with interlocking magnets.

It must be remembered that the 1993 production of "The Nightmare Before Christmas" used both facial replacements and a stored image/live image form of frame grabber. The G&M faces were the first to split the face into two pieces.

These G&M replacements precede Laika's "Corline" which used the same split face and magnetic registration, by eight years.  The difference here being these were hand sculpted and cast replacements, as opposed to computer sculptures exported as 3D prints.

I'm not sure why this technique wasn't used in the actual production, which went with wax replacement mouths, (I feel it may have been too expensive), but the craftsmanship is astounding and the seam on the face is almost invisible, at least in this still image.

As have been stated before, the computer allows the ability to do more easing into and out of facial extremes, making smoother animation with less chatter, and a way of previewing and modifying before exporting to hard print copies.

"Gary and Mike" has the distinction of being the first stop motion production to be done digitally. Before then, it was customary for animation to be shot on film and then transferred to video.  This bypassed that method using small lip stick sized digital cameras placed on sets and a custom made data storage system was built to accommodate all the digital still images that made up the action.

The infrastructure for the Will Vinton digital pipeline used for "Gary and Mike" in 2001, created a template for much of the feature work being done today. 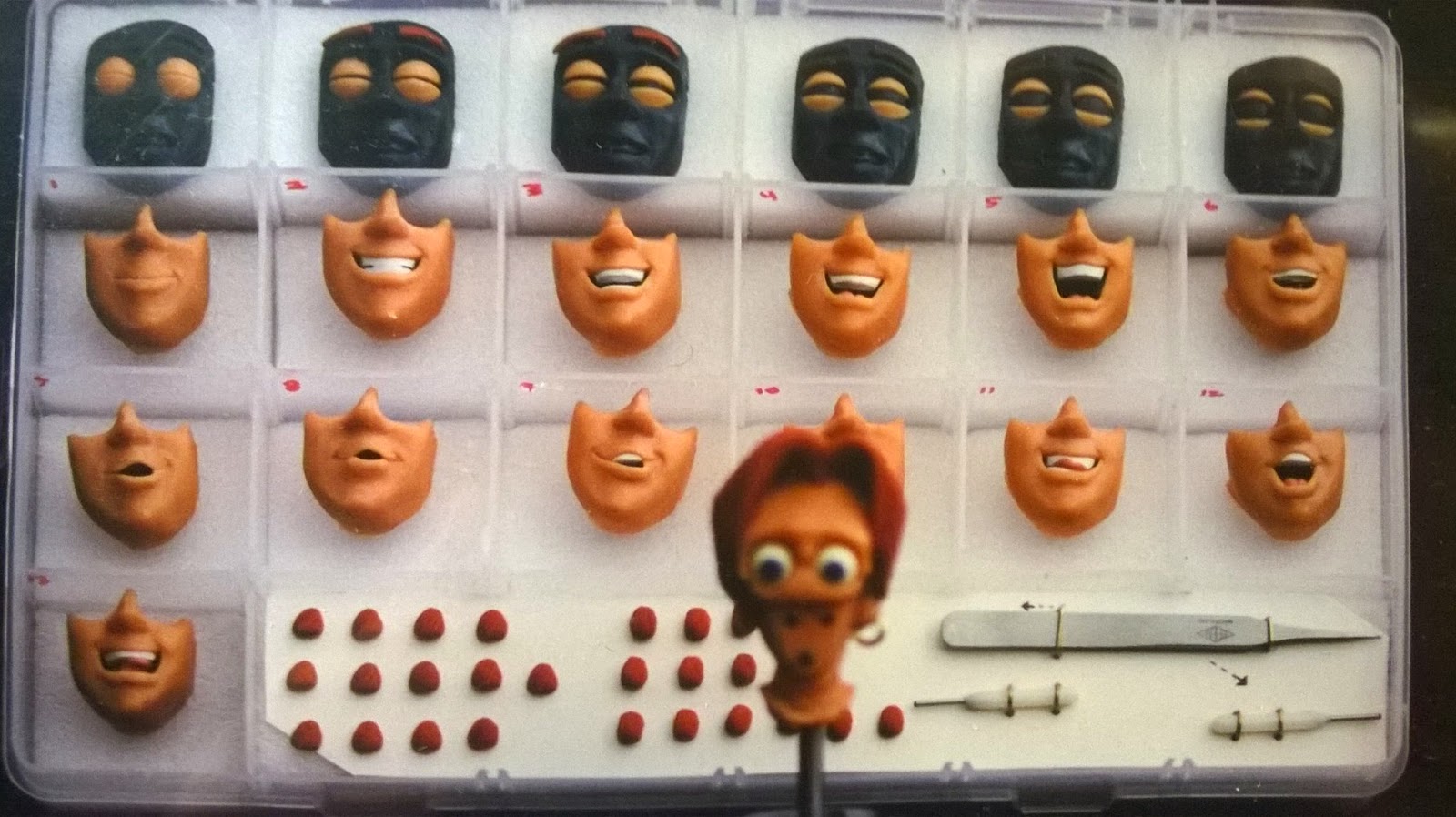 Posted by Joel Brinkerhoff at 9:22 AM No comments:

It's rare that I get to do much emoting in commercial work so I've been playing with some acting exercises just for fun.

What I find interesting is how the same character can have a different personality depending on the voice and the dialog.

The first voice I chose is actress Piper Laurie, and the feeling I get from her is a middle aged woman who has had it with a disrespectful younger lover, (this is all fabrication on my part because I've never seen the movies). I don't know who the next British actress is but she sounds much younger, like a teen, or early twenties, and is either proud of or embarrassed by having been caught in a lie. The last is the late great Phyllis Diller, who always brings a wacky flare to all her work. I think of this test as a princess possessed by a crazy witch. She looks very cute but her actions give her away.
Posted by Joel Brinkerhoff at 7:29 AM No comments: