This is a work in progress.  It's a digital sketch for a painting that will be done using acrylics.  These are original character designs of mine for an Illustration for The Owl and the Pussycat from the poem by Edward Lear.  I've started working color, design and compositions digitally before committing to canvas these days. 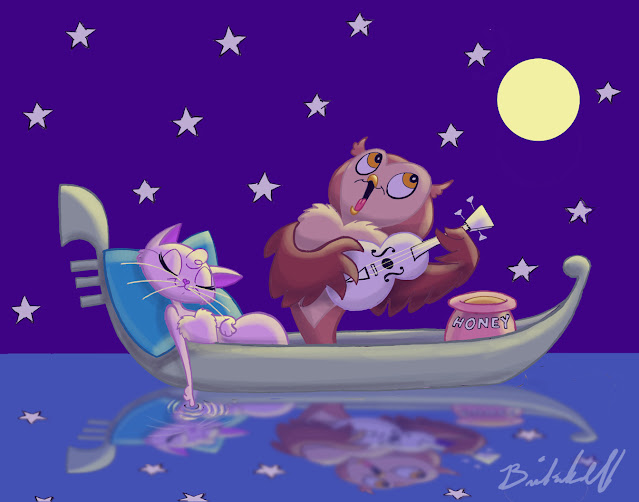 Posted by Joel Brinkerhoff at 7:13 AM No comments:

I keep forgetting about this blog so I don't post too regularly.  The latest painting I did was a modified copy from an unknown artist I did for a friend who has been on me for years to do.  I flipped the image and removed a figure making a total of 14 people.  I also made it monocromatic and used acrylics because color and oils would have taken for ever to do.  They were happy and that is what matters in the end. 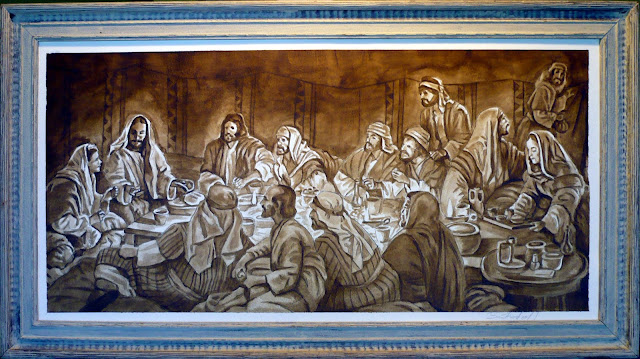 Posted by Joel Brinkerhoff at 7:06 AM No comments:

I don't keep this blog up consistency, but thought I would include the painting I did for my granddaughters birthday.  She's just turning 11 and is into aquatic life, so I did a painting for her room to celebrate her birthday with an aquatic theme.  It's a bunch of reference material from the internet composed in Photoshop which I transferred to canvas and then painted using acrylic paint.

I'm still getting used to acrylics and approaching it like watercolors. I blocked off the critters using a latex matte and then did a wet wash for the background in blue, then added the critters after removing the mask or matte.  Hope she like it! 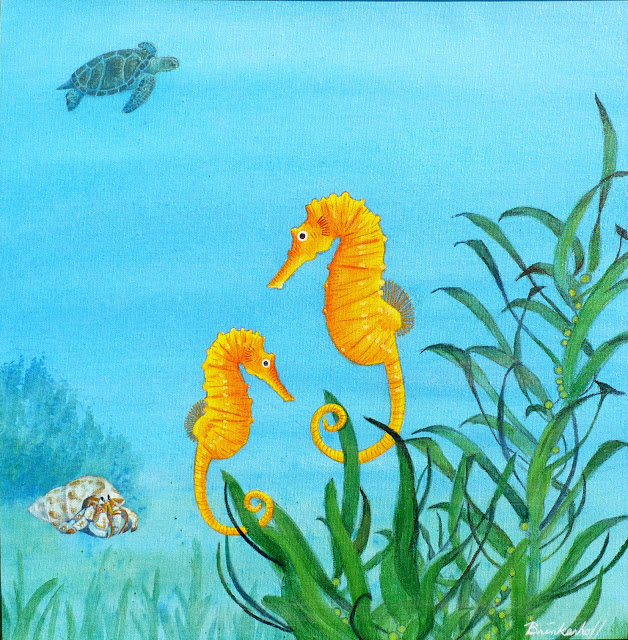 Posted by Joel Brinkerhoff at 7:35 PM No comments:

I have this custom made collapsible portable animation stand that I'm not using these days.  Now that everything is digital, my poor drawing table sits idle.  I had it built with two lawn-chair hinges so I could raise and lower it for a comfortable drawing angle.  I added a removable copy stand rostrum for a digital or film camera and used it for pencil tests and full production work.  It's still cool and I have it set up in my office just for kicks right now. 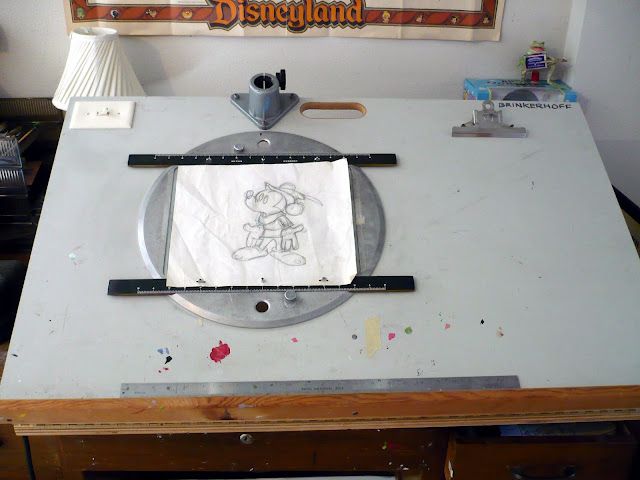 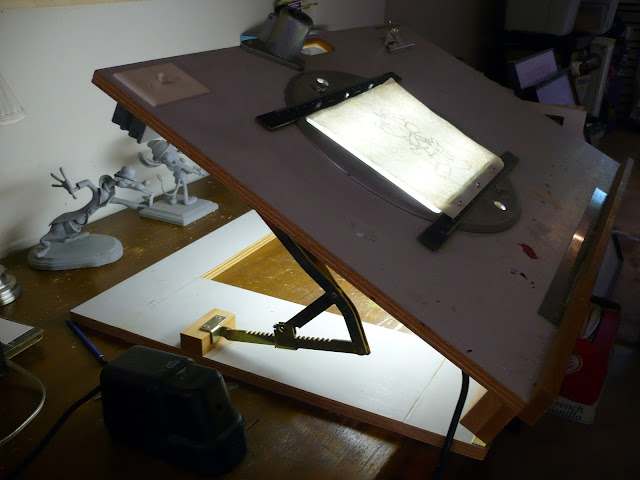 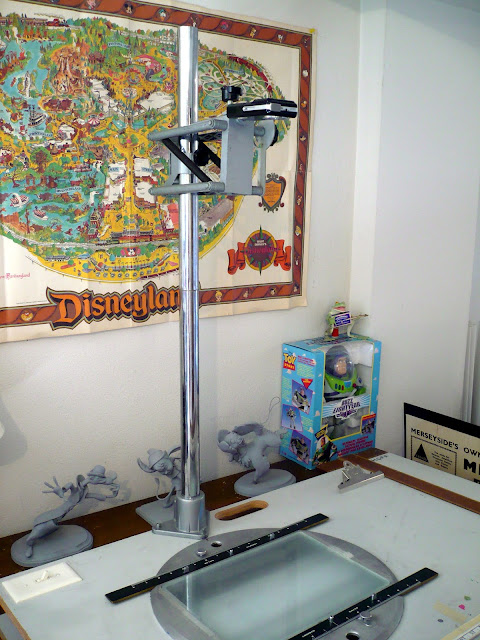 Posted by Joel Brinkerhoff at 2:49 PM No comments:

This is the trailer for the finished film started in 2017 originally called "Welcome to My Daydream " about Will Vinton and his studio.

Posted by Joel Brinkerhoff at 10:09 AM No comments:

Music and Mood in Animation_ The Two Jinn's

I made Jinn Jinn Meets Sadiqi over the CoVid lock-down purely as a distraction.  During the making, I fell in love with the scratch track by Ravi Shankar because it captured the playfulness and spirit of what I was trying to do in animation.  As it usually happens, I couldn’t get the rights to use the music in its entirety and had to find free music that fit the flavor and action but it changed the whole level of energy and mood.  It works, and you can see it here: https://vimeo.com/447473057    But, I still missed the Shankar tribute version, so I put this version of the Ravi piece here on my blog just to show how much music can influence the feel of an animated cartoon.  Sorry for the poor quality, (go to the linked version above for better image quality and the alternative sound track), but this way I won’t get any strikes or violations…

I never know who or when someone is looking at this blog, I don’t tend it every day or give it much attention, but it’s been a great way of learning things!

Just recently, a comment on one of my View Master posts led to the discovery of a new artist who worked on translating my favorite cartoon characters into 3d sculptures for the View Master reels.

Meet Martha Armstrong Hand who, I can only conclude, worked around the same time as the already mentioned Florence Thomas and Joe Liptak.  There seems to be some confusion between Martha and Florence on who is who when it come to the photos, and I am thinking some got miss labeled as Florence when they should have been Martha.  Regardless, we have more information on Martha, and learn which View Masters she actually worked on plus learning of  her career as a doll designer for Mattel Toys!

Special thanks to Lori for sending this article!

Posted by Joel Brinkerhoff at 11:08 AM No comments:

It's the Corona virus self quarantine here, and I’ve decided to spend my time working on another ‘homegrown’ cartoon from my home studio.  I'm expanding on something I wrote about earlier in a posting called Seeing Things that goes over the same discovery process talked about here.

The origin for this film is unique in that it wasn’t inspired by a book or my attempt to create an original character, it came from a tablecloth! There is a phenomenon called Pareidolia where the brain tries to make sense of chaotic information presented to it.  This is how we see pictures in clouds and faces in patterns.  My wife has a tablecloth we use often and in the pattern I saw this extraterrestrial flying in his aircraft, and in another section of the cloth was his alien friend or pet.

I’ve named the ET Jinn Jinn because he might have been confused as a genie because he rides in a Vimana: a Hindu flying chariot.  His friend Sadiqi, (which means friend), is also an inter-dimensional spirit buffalo, or something.

Originally I had envisioned Jinn as a time traveler flying around looking for fun in different historical events and accidentally altering history.  He's the one who put the crack in the Liberty Bell and tipped over the Tower Of Pisa.  Anyway, I settled on an origin story of how Jinn meets his pal Sadiqi, it gives me an opportunity to figure out who these guys are and what they look like moving.

Like The Yellow Submarine, this film is becoming a mixture of cultural styles, and turning psychedelic pretty fast.  I know this is not going to be liked by everyone or maybe anyone, but with the quarantine going on; it’s a nice way to spend some time.


Here are three tests strung together with a scratch audio track added, (it might not play too smoothly).
Jinn Jinn doesn't have pupils yet in these tests which makes him look more evil than he is...