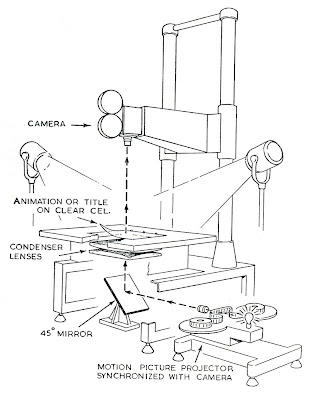 Clicking the title or pasting the link above will take you to an article posted by Michael Sporn about John Oxberry, the maker of animation cameras.

It brought back fond memories of my first job in animation. It was at a commercial house in Ft. Wayne Indiana that used an Oxberry with aerial image projection for rotoscoping, effects and combining live-action with animation.

I recall the hum of the motors that ran the camera up and down it's double rostrums was loud enough to drown all ambient sounds from the room. This was a good thing and helped focus your attention on the mound of artwork, the correct camera settings and following the exposure sheets.

The N/S, E/W pegs were all hand cranked, (there may have been servo motors too that you could program), and the exposure sheets had all the computations for every frame marked out in the camera column.

Fortunately for me it was not my job, although I did shoot some less complex scenes on it, because it involved consulting big expensive books full of mathematical equations to figure compound moves with fairings to ease in and out.

Our brainy cameraman Chris Dusendschön later went to Robert Abel Associates and got involved with effects and early computer graphics.

My second experience with Oxberry was at Will Vinton's Claymation Studios. There was a derelict camera that sat dejected for years until another brainiac Animator/Director Hal Hickle restored it single handed. It was used for titles and Animator/Director Mike Wellins did a short film using paper cutouts on it.

I am excited by the digital revolution and the autonomy it allows. But I'm also glad to have experienced the early method of cartoon making and kind of miss the big toys. 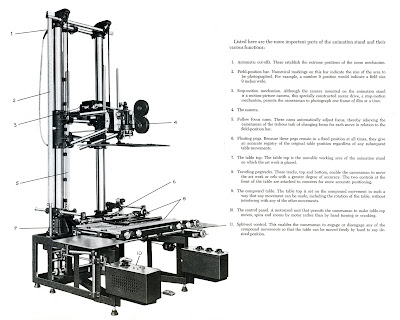 I haven't read this book but I love the cover. It's great that Walt was photographed from the same angle and posture. I love the intensity of his early picture and the contrast of the later well groomed Walt. 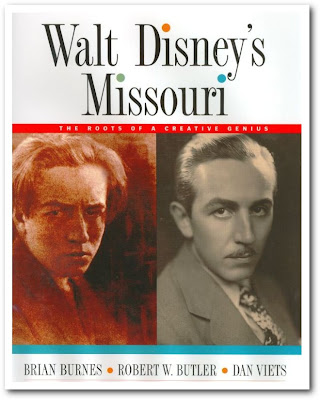 Something Strange and Provocative...

I found a great blog about Illustrators called Today's Inspiration that you can find here: http://todaysinspiration.blogspot.com/

There is an article about my favorites, the incredible husband and wife team, Alice and Martin Provensen.

I was surprised to learn they designed Tony the Tiger and the other Kellogg cereal mascots in 1953.

Click on the title or go here to read more: http://todaysinspiration.blogspot.com/2008/07/provensens-something-strange-and.html 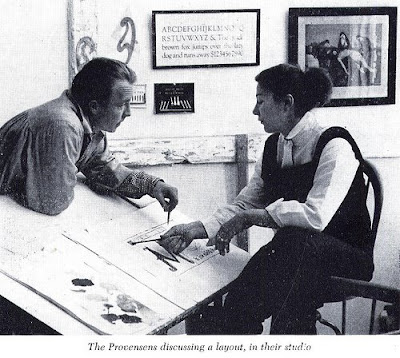 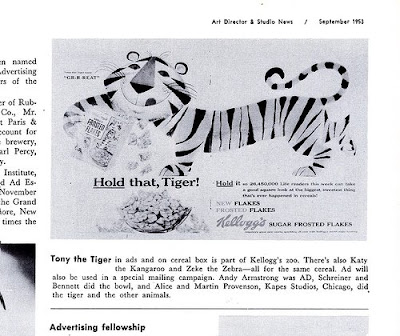 Posted by Joel Brinkerhoff at 11:17 AM No comments:

It's all in the Scrawl 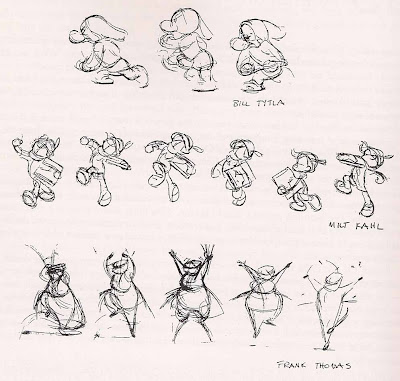 
I’ve been enjoying the first volume of Walt Stanchfield notes from Disney drawing classes, “Drawn to Life”. It’s a wealth of information that must be taken in doses.

Like animation itself the book is intimidating in the amount of details that must be judged and juggled, but there is also a source of comfort for me. The book is filled with scrawl. I know scrawl is a term for poor penmanship but I'm using it to describe loose scribbley tangled drawings.

We are all familiar with the beautiful draftsmanship and elegance of a finished Disney still. What we haven’t been privy to are the rough developmental drawings that evolved into these beauties.

The examples I’m posting are actually more legible than most but show the loose building up of masses and how they relate to each other traveling through 3D space.

Being able to see the masters’ messy exploratory scrawl is always liberating for me and I feel less inclined on trying to make a ‘pretty’ picture and more empowered to do something with vitality and power.
Posted by Joel Brinkerhoff at 8:53 AM No comments:

Getting Goofy with Toon Boom...

I started playing with the Toon Boom Animate Preferences settings and found I could get a fair digital 'pencil' that would act more like a real one. I also decreased the opacity on the pencil color so now I can sketch lightly and build up a line without it becoming too dense.

Here's a walk I tried using a model sheet of Goofy I found online.
I had read somewhere that Goofy was kind of a circus clown so I wanted to try and make a goofy clown walk for him.

I didn't bother cleaning and finishing this because I'm lazy, (there's some stutters here and there I need to take out too), but I think I'm getting a technique worked out.

There have been some unexpected crashes too and I don't know if it's a Vista compatibility issue or what. Sometime it's pretty smooth going and I get lulled into a false sense of security.

I'm still using a Wacom tablet but if I angle it a bit it's more accurate.

Perhaps this part should be called Goofy in the Sky with Diamonds...

I took my ruff animation and just colored it to see what it might look like with solid fills. I stuck a background behind it but it wasn't long enough to pan so I stretched it.

Even though it's a little trippy I'm encouraged that I could do old school type animation with this.

Posted by Joel Brinkerhoff at 12:36 PM No comments: