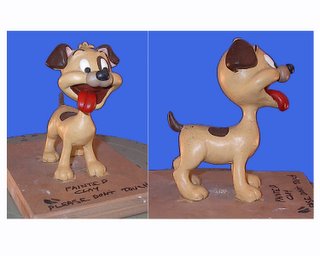 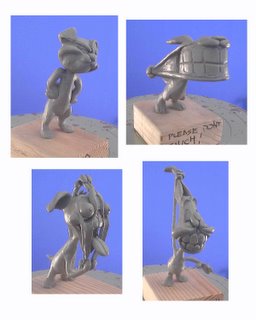 This is another example of some pitch material for a short film. The challenge was to do something in CG that didn’t look CG. I thought it would be cool to design a piece that looked like a forties cartoon and had the shock value of Ren & Stimpy, (this was when R&S first appeared). I made a storyboard and these clay figures that tell of a dog who encounters a mirror. He thinks it’s another dog and starts pulling faces until he pulls the flesh right off his skull. Okay, not so funny.
Posted by Joel Brinkerhoff at 5:39 AM

Hey Joel, i like this stuff! That's the spirit i want to see :)