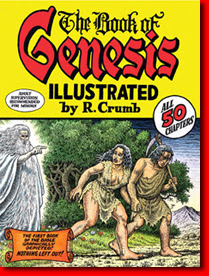 One of the more curious things I've run across is "The Book of Genesis" illustrated by Robert Crumb. An interesting interview by The Paris Review tells us what motivated Crumb and how he spent four years making the book. It also goes into other interesting things about Crumb and the whole article in it's entirety can be found here:

What I found interesting is something Crumb wrote in his Genesis book end commentary.  During his research he found these stories were never buried and then rediscovered later,  that they are the oldest texts in continuous use in Western civilization, and that peoples belief in these stories being the word of God has preserved them for millennia while the stories of the gods and heroes of Egypt, Babylon, and Assyria were buried and forgotten along with these mighty empires.

What I also found compelling is that Crumb had initially wanted to do a comic set up of Genesis but changed his mind and did a very faithful translation with no comedy.  The only thing remotely done in a comic fashion that I found was the depiction of Noah"s sons who bare more than a passing resemblance to the Three Stooges.

I don't know what it means for a subversive underground cartoonist famous for depictions of sexual perversions to do a labor of love like this book.  I doubt if Crumb were having a religious conversion, but all things are possible.  I will close this out with just a portion of the Paris Review article that I also found curious.

INTERVIEWER
Let’s begin with Genesis. Where did this book come from?

R. CRUMB
Well, the truth is kind of dumb, actually. I did it for the money and I quickly began to regret it. It was an enormous amount of work—four years of work and barely worth it. I was too compulsive about the detail. With comics, you’ve got to develop some kind of shorthand. You can’t make every drawing look like a detailed etching. The average reader actually doesn’t want all that detail, it interferes with the flow of the reading process. But I just can’t help myself—obsessive-compulsive disorder.

INTERVIEWER
Was the act of drawing a God figure a challenge? You have had panels in the past where God is speaking to someone.

CRUMB
He had features almost like Mel Gibson or Charlton Heston, very severe but at the same time sort of anguished looking. And he was warning me about something, very briefly, warning me about this destructive force that was getting stronger, and since He loved Earth or this reality or whatever you want to call it, He was enlisting me to be one of the people to protect this reality from this destructive force. When I was trying to figure out how to draw God I remembered that image, which I could look at only for a split second, it was painful to look at this face, it was so severe and yet so anguished.
Posted by Joel Brinkerhoff at 6:39 PM