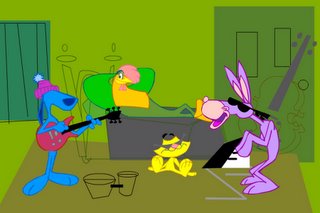 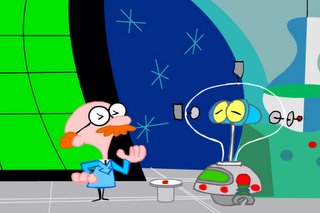 These are screen-grabs from a three minute demo in Flash that I tried to sell to Cartoon Network showing Dr. Smartnik with his robot Hawking (like in Steven). I thought Dweasle the dog looked too much like H&B’s Oggy Doggie Daddy so I added a wool hat like Mike N. in the Monkees. Dweasle’s personality is Ringo Starr. Sir Bop the donkey is Barry White. Slats the cat is a smoother Wolfman Jack and Chicky the rooster is Little Richard. Try to picture them as reluctant crime-fighters. Now if you’ve read the previous post on this you know Doc Spartnik lives on an observation satellite along with his robot Hawking. If this sounds suspiciously like the short smart glasses wearing red-haired kid with the bulbous head and the sarcastic robot that dwell on an observation satellite in Cartoon Network’s Time Squad, I can only say my demo preceded it.
Posted by Joel Brinkerhoff at 5:53 PM