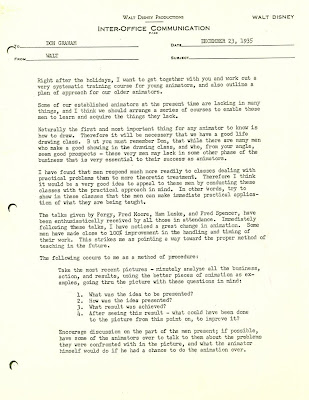 This is one page of an eight page letter from Walt Disney to Don Graham about Disney's idea of night classes for his animators.

Clicking the title or pasting the link above will take you to Michael Sporn's posting of the entire letter and a little history on how these classes later evolved into Cal Arts.

What leaps out to me is Walt's understanding of the needs to be communicated in animation and how best to teach these ideas. He shows an understanding of how motion is influenced not only by physicality but also motivated by emotion.

Walt doesn't shoot out some ambiguous letter full of generalities on improving the product and building moral. This letter is a well thought out strategy suggesting the needs and how to meet the needs to push his studio beyond what everyone else thought animation could be.

The success of Disney animation clearly came from Walt's willingness to equip his artists with a full training in draftsmanship and motion analysis and his practical suggestions on how to go about achieving that.
Posted by Joel Brinkerhoff at 11:47 AM

any opporotunity for an animator-artists to improve their work is so AWESOME!

I wish I worked at a place that promoted these concepts.