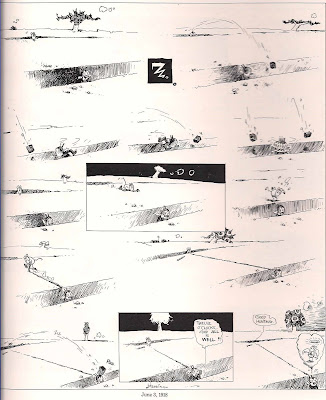 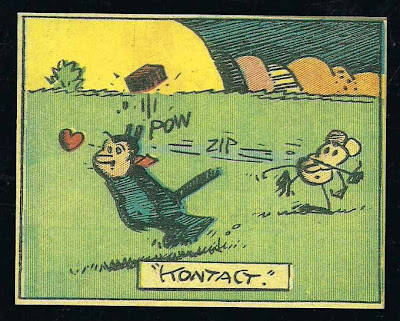 Although faithful to the original strip this test minimizes the transitional landscapes, wisely going with cuts, and prettifies the designs over what Herriman conceived. The premise comes from a 1918 strip but uses a 1940's Kat. Perhaps stop-motion wasn’t the best choice because it couldn’t carry the graphic nature so essential to the strip. Yet you can't argue the fine animation. The narrative is perhaps the weakest part of this presentation being far too modern and lacking the poetic flavor of the original. Unlike other comic characters like Popeye and Charlie Brown, Krazy Kat has proven to be too unique a vision to bring to the screen so far.
Posted by Joel Brinkerhoff at 6:01 PM

what a cool find man!!

I just favorited it....so i can study later.

why do they insist upon making him/her/it dimensional, when Krazy Kat is so definitely a graphic animal?

Interesting idea. I sometimes think the best way to enjoy Krazy maybe to stick with the original strip.