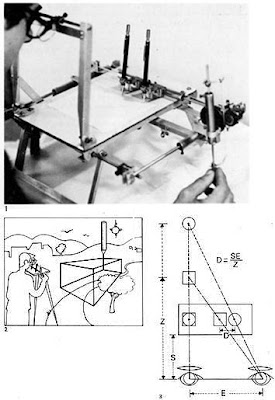 Awhile back I did a post on ViewMasters' intriguing series of stereoscopic drawings begun in the 50's. How were they accomplished? I still don't know specifically but I came across this devise called a 3DD, (three dimensional drawing device), built by Vladimir Tamari in 1973. He says the original was invented in Palestine in 1964. This makes it ten years after ViewMasters' series began. The drawing size of the 3DD is very small too which would limit the detail one could achieve.

I think I'm getting closer. But if anyone who actually worked at ViewMaster or knows someone who did would get a hold of me I would greatly appreciate it.
Posted by Joel Brinkerhoff at 7:51 AM