Mark Mayerson has posted a great analysis on the differences between Motion Capture and true animation which I've printed a portion of below. Marks' blog:http://mayersononanimation.blogspot.com/ is always a wealth of information.
__________________________

With motion capture, motion exists in the real world. It gets sampled and then applied to a computer character. With animation, the motion does not exist in the real world. It is constructed and only exists when the images are rapidly displayed, creating the illusion of motion. That describes the process. There are several differences philosophically, however. Motion capture seeks to convince an audience through the accumulation of detail. When it falls short -- when it is criticized for looking like a waxworks -- it is due to insufficient detail in the motion. Therefore, the goal of motion capture is to increase detail to the point where it is indistinguishable from live action. By contrast, good animation seeks to eliminate unnecessary detail in order to arrive at the expressive essence of a motion. 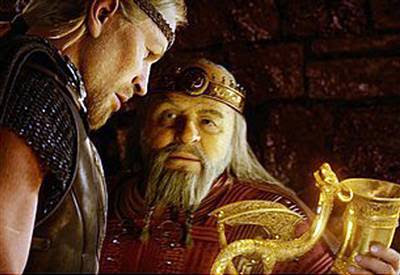 Image from the MoCap film Beowulf from director Robert Zemeckis.
Posted by Joel Brinkerhoff at 10:04 AM