I'm seeing a resurgence of a philosophical phenomenon known as 'Objectivisim'. This is a term Ayn Rand used to label her view-point taught in her two books "The Fountainhead" and "Atlas Shrugged",(written in 1957 it is strangely enough being made into a movie to be released in 2009) . It's also the same thinking Aleister Crowley taught and that Rock and Roll helped promote through out the 60's. Basically it's everyone for themselves. A Darwinian mentality that tells us we aren't accountable to others and if you can't make it, too bad.

I don't know what it all means and perhaps I'm only paranoid but we are already too selfish. Yet I hate to say it but many people feel the world owes them a living and I don't know how it's going to go down when others suddenly start to see them as a drain and labeled 'looters' of society. I'm a little scared! 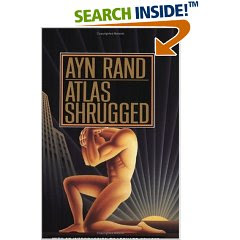 Aleister Crowley on the Beatles Sgt. Pepper album
Posted by Joel Brinkerhoff at 10:09 AM

I found 'Atlas Shrugged' to be interesting yet exhausting read. I thought it to be more of a commentary on Communism with the resulting group-think and mediocrity - much of what I see happening today. I feel conflicted.

We are already all selfish all the time.

Try being not selfish, see if it's possible. Even then you'll do it for the pleasure of calling yourself "unselfish".

Ayn Rand is a genius!